Hermann Nisch. Behind the altar of Hermann Nitsch 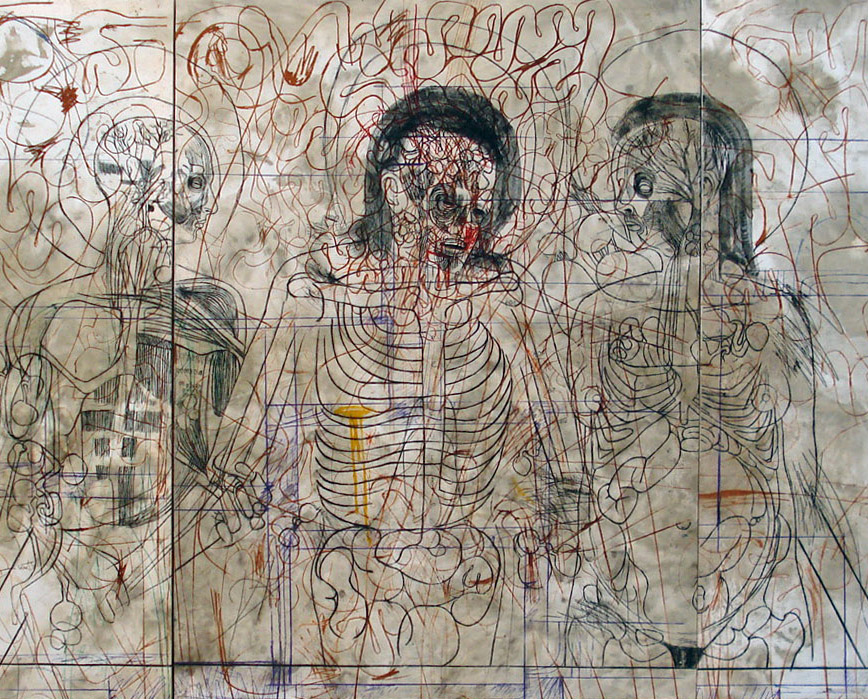 EHIND THE ALTAR OF HERMANN NITSCH

In the complex world of the Orgien Mysterien Theatre, the liturgical focus is on the action of performance, on the obsessive, repetitive gesture of a Dionysian ritual that draws in the sacral essence of Catholic mystery and the sabbatical frenzies of medieval esotericism. Here the symbolic renascence of a sacrificial process acquires shades of bacchanalian perversion, where a dimension of suffused, magical spirituality fades into a lascivious, turbid corrosion of the flesh.

The liturgical action that Nitsch entrusts to the entire process of the OMT is the supreme synthesis of a form of total creativity that mingles languages, overlapping their tones, and blending times and recitals. The philosophical and religious interweavings that inspire Nitsch’s artistic process represent not just the enigma of the existential congestion that we all try to drown in the flow of rationality, but also the need for a whole range of expressive parameters capable of reaching otherwise inaccessible truths through interaction and communion.

Music, dance, painting, acting, and singing are the media that the shaman agitates during his chaotic journey through the obscurity of truth. They are the means with which he moves through the theatrical body of an audience who cannot just be spectators, and through a truth that cannot be simply revealed but that must also be experienced and shared. And thus it is that, on each occasion, the gelatinous, visionary surface is broken by the ritual of the Crucifixion, or of the sacrifice of Abraham, by the tarantular dances of southern witchery, the ascetic ecstasy of Dervish whirling, and by abandonment to the frenzies of bodily pleasures of Hellenistic classicism, but also by those of late-medieval funeral feasts in the North. What we see condensing in Hermann Nitsch’s art is a dark compendium of European cultural anthropology, a cloggy, pasty amalgamation, a conceptual bitumen that bunches together different influences, distinct references, and distant thoughts.

It does so in order to create a single intellectual map in a search for the secrets of life. Nitsch’s philosophy, which emerges through the action of OMT, is a great dance through the history of Western thought, a sublime journey through the most important junctions of faith that the intellect has ever produced. It is a speculative gamble along the paths of reason. It is possibly this disjointed approach to thought that requires this schematic overturning, suggesting the need for a special protocol which, in formal terms, constitutes the backbone of the liturgical theatricality in which the essence of Hermann Nitsch’s art acquires form. As well as being extraordinarily effective and well-defined, the liturgical structure is also a formal instrument that is capable of rearranging and organising the jumbled complexity of the artist’s thought. But, as in any liturgy, there is a public side to it, which is that of the sacrificial and orgiastic action, and a more discreet, almost modest preparatory aspect that the artist studies and analyses in an extended time, tackling each detail, transcribing each movement, dwelling on each musical note, and meticulously establishing times and rhythms.

It is the slow preparatory work of the action and the writing of the event, it is the ceremonial secret that takes place behind the altar of OMT. It is a ceremonial consisting of obsessive drawings, insistent musical scores, scenographic rules, dramatic tempos, and recitative roles and fields. Everything has to move along the lines traced out by the artist, the randomness is well-ordered and composed, and each gesture finds its own frame and improvisation discovers its own boundaries. In the subterranean mechanisms in this preparatory study, a decisive role is that of the process of dressing – not as a stage effect for the actor but rather as a ritual that is similar, in terms of elegance and drama, to that of the dressing of a bullfighter or, in terms of sacrality and mystery, to the investment of the ministrant in the Catholic and Orthodox churches, or to the moment when a boxer is bound.

The artist too wears a ritual tunic, the way a shaman carries his rod, letting himself be enveloped in its whiteness. He is inebriated by its perfume, knowing full well that its purity and perfume will vanish the moment the Action starts. And yet the symbolic value of the tunic transcends the object, sweeping aside its instrumental value, forgetting its historical memory, and abandoning its spectacular image. In other words, it is no longer just a garment worn to protect against a gesture known to be incontinent, and it is not even the traditional white coat that the artist wears in his studio in order not to be drenched in colour. Nor is it the stage costume that the actor wears in order to enter the part and start acting. Nitsch’s tunics are works laden with gestures, immersed in the actions, and modelled by the artist’s body and movements. They are the mysterious relics of a body that has been dissolved in the sacrifice of art, profane holy shrouds of a presence that has run its sacred course.
It is thus no coincidence and no merely formal aspect that the tunics are often “crucified” on the canvas, that their testimony demolishes the superficial layout of the composition, and that their presence as relics demands a more cautious and strict interpretation of the work. Even though soaked in pigments or grease or blood, these tunics never abandon their simple poverty. They never betray their Franciscan humility. Black, red, violet, and blue garments that joyfully welcome colours, oozing memories, and representing the face of a work that is now complete and that has dissolved and vanished, but the emotional pulsation and sacrificial traces of which remains in its wake, in its folds and in its liturgical outlines.

While the coat represents the body of art, the drawing is its visionary secret, and its obsessive and insistent sign, a sign that is obstinately involuted, contorted, tormented, apparently uncertain, and always complex. It is a trace of suffering, attracted by the flesh of the tale, almost indifferent to the subject of the image, but stunningly concentrated on the fibres of the structure and on the sanguineous system of the figure. Just as the donning of the tunic preceded the magic of the Action, so the drawing almost appears to depart from the gesture, distancing instinctiveness and randomness, and falling back on a more shadowy and contained form of reflection.

Nitsch’s drawing is the result of ascetic meditation, ecstasy, and the suspension of an obsessively absent action - the story takes place elsewhere, almost as though there were a narrative plane superimposed on, and independent from, a script that is completely absorbed by contemplation of his own body. The line of graphite or pastel winds its way and recoils in constant volutes, like a sort of symbolic intestine from which shreds of images and barely hinted plots emerge. It is the morbid, suffocating, invasive affirmation of an iconography that dissects and breaks down each figure, appearing to multiply infinitely, expanding, self-generating, and exploding into an unstoppable world of signs and a forest of lines that intersect and overlap, cancelling and reinforcing each other.

The thematic sacrality of works like Last Supper or Jerusalem, as well as Crucifixion, evaporates in the chaotic proliferation of lines from which the energy of the drawing and the formal tension of a language that is autistically lost in its own grammar burst forth. A drawing that recalls the obsession of Marisa Merz’s works, but breathes the atmospheres of Piranesi’s engravings, caressing the architectural forms of Gaudí or the harsh touch of Graham Sutherland. Hermann Nitsch preserves a strange inspiriting force, a sort of compositional silence that follows the line, expectation and absence. It is the perception of the drawing that aims to keep the sense of the narrative to itself, allowing the eyes only the convulsed embrace of confused figures, while keeping the secret of narrative emotion for itself alone. There is no need to search for the image or probe into the composition, for the real essence of this drawing is its abandonment to the movement of the line, giving in to the sinuous rhythm that slips unceasingly onto the paper or canvas, weaving its own visionary world, its own imaginative reality, and the only truth of these bewitching traces.

The music too, which certainly plays a key role in all Hermann Nitsch’s work, conceals some of the more discreet and intimate aspects of its research, and behind its altar we see its writing, or rather its drawing. It has a music that emerges from the dense forest of signs, jottings, and notes that inhabit the space of a pentagram that is now exploded, shattered, dispersed. Nitsch’s musical scores are works in their own right, for they have a spirit of their own and an animation that transcends their performance.

Like the graphic line, in a certain sense it wanders beyond the narrative order, so that the musical score seems almost to demand a leading place of its own, appearing to show a certain indifference to and distance from the performance. Extraordinarily meticulous, clearly defined, precise, and controlled, Nitsch’s musical score is not just a mere technical and formal instrument, and it is by no means just a rigidly applicable manual, for this precious form of drawing has a poetry of its own, a particular feeling, and a formal elegance that must be contemplated even before it is played. And thus these sheets with their wealth of signs and notes, marks and gestures, offer a rare and sophisticated artistic quality. They are like a subtle breath, a light murmur, a suspended thought from which the mystical power of the Action bursts forth majestically and thunderously.

It is the purifying, redeeming gesture of sacrifice, the horrific, life-giving colour of blood, and the contorted carnality of the viscera. So the altar becomes the stage for a play where the only subject is life itself. 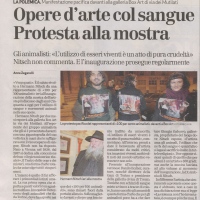 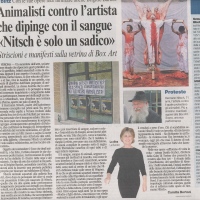