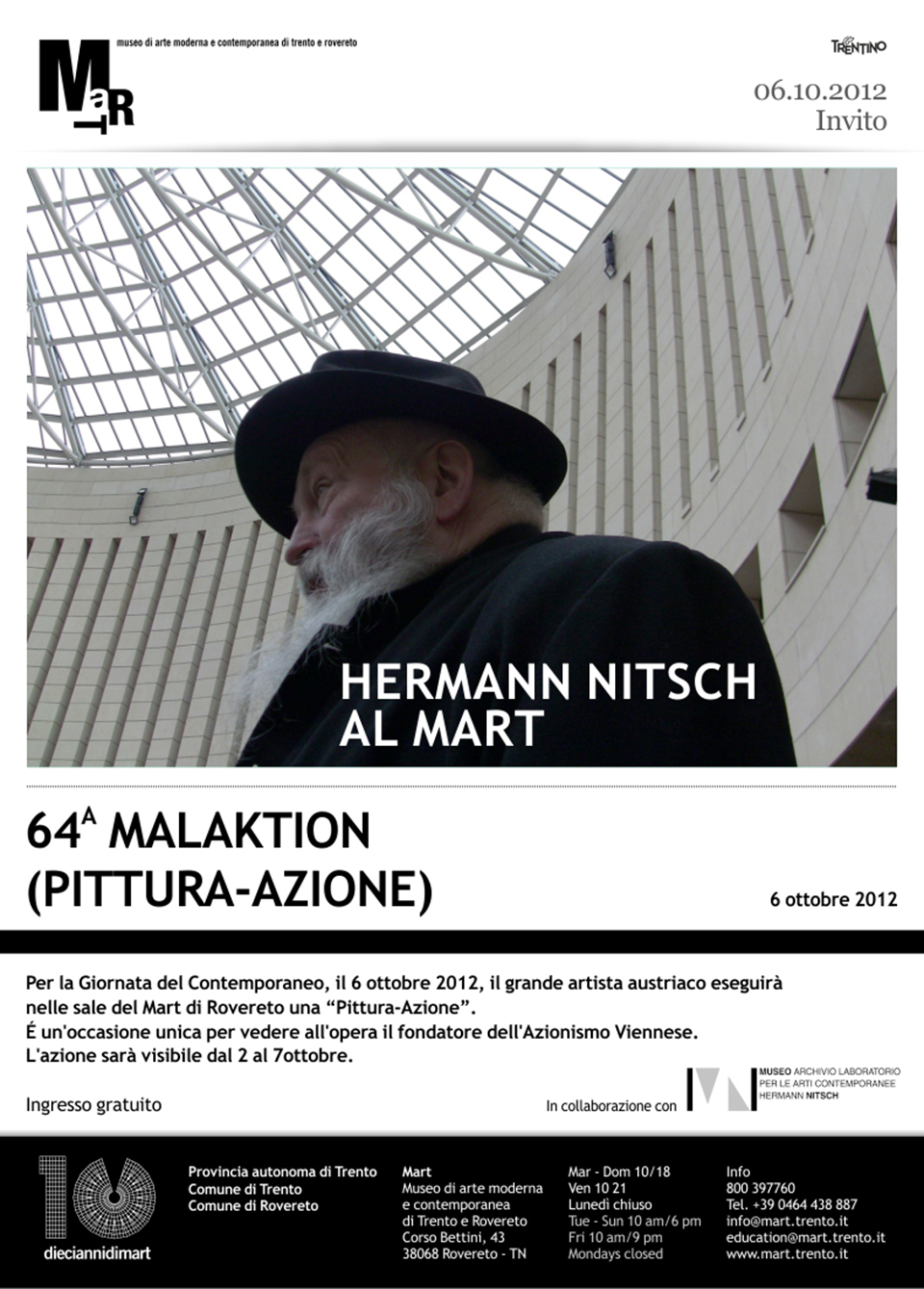 HERMANN NITSCH AT THE MART

Saturday 6th will mark the key moment in an event lasting an entire week, from 2nd to 7th October: Nitsch and his assistants will be constructing the performance in the first-floor rooms of the Mart during eight days of pictorial action. Through movements of their hands and bodies, colours of various consistencies will be sprayed, spread, dripped and poured on to large white canvases laid out on the floor and walls.

The canvases will then be raised and placed on the rooms of the walls, remaining visible until 8th October. In this way, the artist will fulfil the Wagnerian ideal of the total work of art – a single complex between result and process – that has always been a source of inspiration to Nitsch.

The event is free and is realised by the Mart in collaboration with the Museo Archivio Laboratorio per le Arti Contemporanee Hermann Nitsch of Naples.

Nitsch’s actions should be seen as spaces in which to live a profound experience in which hundreds of people participate; his total work of art is associated with the psychoanalytical principle of Abreaktion, the emotional discharge enabling a person to remove the effects of dramatic events and gain awareness of imposed taboos and suppressed desires.

"My actions", writes Nitsch in The theory of colours, “are the initiation towards colour, towards the profound secret of colour. The colours are torn from the heart and from the guts of butchered animals. The flesh becomes the meaty pulp of flowers. Colour is produced by the fury and light of nuclear explosions. A monstrous force and the fury of creation makes everything shine, leading colours towards their birth, things towards their manifestation, towards their chromatic vitality that breathes. Alongside the colours rise the scented essences of the flowers, the sweetness of pollen. Only when everything – the galaxies, the solar systems, the innumerable suns and worlds – have awoken to the luminous and chromatic inebriation does the supreme form of the living appear, the luminous figure of the saviour in white garments who awoke once again to light, the radiant sunny face of the laughing saviour arisen (the Isenheim altarpiece). His face is surrounded by the light of all the suns in our cosmos, with the starry sky in the background”.

The origin of the expressive form of Nitsch, a dramatist, composer and philosopher as well as visual artist, is a complex one but harks back first of all to an act of rebellion against the devastating silence characterising Austria immediately after the Second World War; this was almost an exhortation for Nitsch, impelling him towards his dazzling, cathartic explosion of vis creativa, in an epic and apparently brutal form. In order to understand the meaning and intensity of life, theorised Nitsch, one has to be aware of the emotional extremes defining its borders: from ecstatic exaltation to feral suffering.

Hermann Nitsch’s works are to be found in numerous collections: apart from the Mart di Rovereto, in the Metropolitan Museum of Art, the MoMa, Guggenheim New York, the Museum of Contemporary Art Denver and the Tate Modern in London. In 2007, the Austrian government dedicated the Hermann Nitsch Museum at Mistelbach, near Prinzendorf where he lives, to the artist. In 2008, the Museo Hermann Nitsch - Archivio Laboratorio per le Arti Contemporanee opened in Naples.