Steve Sabella. Archaeology of the Future 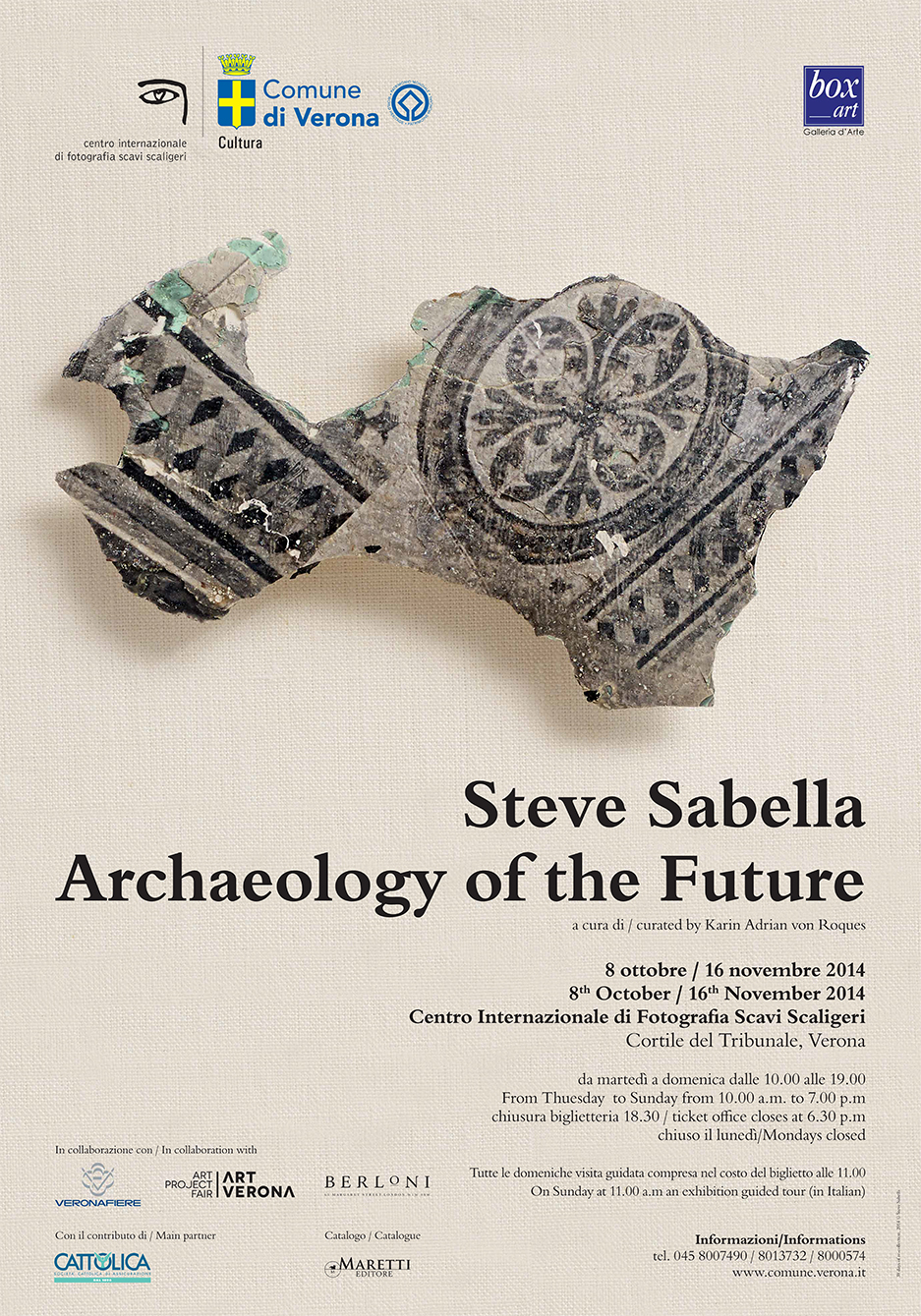 Discoveries of a Mental Journey

The Centro Internazionale di Fotografia Scavi Scaligeri is hosting Steve Sabella: Archaeology of the Future , the first solo exhibition by the artist of Palestinian origin in an Italian museum. Sabella’s artistic research takes up at real challenge facing photography today, which is the principle that links the image to the imagination. The exhibition, supported by Boxart (Verona) and in collaboration with Berloni (London), has also been made possible by the critical assistance of the Islamic Art historian Karin Adrian von Roques, who has enriched the catalogue with a generously in-depth essay. As one of the events of Art Verona, the exhibition is being held in the PhotoArtVerona section, with the official opening, on Saturday, 11 October, coinciding with the weekend of the fair and with the tenth Giornata del Contemporaneo, organised by AMACI (the Association of Italian Contemporary Art Museums).

So why “archaeology of the future”? The title of the exhibition is clearly a paradox, but more than anything it is a manifesto of intent. It is only by digging into what Bergson called the “stream of life”, which is to say into the meagre past of a human existence, that it is possible to get closer to the bases for a single tomorrow, which in many respects is shared. And if the pleasure of this excavation – of this recherche, as Proust pointed out – is not in searching for new landscapes but in travelling with new eyes, then Steve Sabella is an authentic traveller. Through his eyes we can take a glimpse at his exile from Jerusalem – where he was born in 1975 – to Europe, but, like the fourth dimension of Cubism, his view also opens up an inner vision of space and of a sequence of events. It could indeed be said that many of the works on display in Verona are in a sense derived from Jerusalem, in some cases mimicking age-old archaeological fragments. There are stones from the Old City and fragments of paint detached from the houses occupied during the war of 1947-48 – from which some 700,000 Palestinians were forced to flee. A bitter conflict that has still not been resolved. Every trace left by the artist is thus a fragment of history stuck in the present, an instant which sums up the premises for the future. The mere facts and biography of the artist – who moved to London in 2007 and who has been in Berlin since 2010 – are therefore insufficient to retrace the steps of a journey that is clearly neither chronological nor geographical, but existential. For visitors to the Scavi Scaligeri, the artist thus recreates a truly authentic and complete map of his experience, in six stations and one “free zone”, combining his experience and his mental reformulation of it, as well as a symbolic place for humanity: Palestine.

To quote the titles of two of the seven cycles on view, Sabella goes from his exile all the way to independence, through the stops he made of equal number– as both man and artist – from 2004 to 2014. As we have seen, these six stages are accompanied by a transitional area called In Transition. The places portrayed are not real, but rooted in memory, onto which he grafts his imagination, with no link to objectivity or the past. Similarly, the chronological development of his physical journeys from A to B is dropped, making it possible for the two extremes to coexist at the beginning of the exhibition. Five works from the In Exile series of 2008 are on display, in the first corridor of the museum, next to the one that also constitutes the final leg of Sabella’s journey. This is Independence (2013), a photographic cycle from just last year. In the first case, the landscapes are those of his recollections, with photo collages created by assembling portions of space: pieces of houses, windows, cornices and terraces. The repetition of one or two images from different angles, reassembles memories of places he knew, creating a mental landscape that is different from but no less kaleidoscopic than the “real” one. Sabella’s collages may appear like Cubist images, deconstructed and reconstructed, from the three-dimensionality of the “real” to the two-dimensionality of photography. And this takes us back to Bergson, not coincidentally the theoretician of Cubism, for whom the “real” as applied to time does not coincide with the scientific measurement of it, but rather with a subjective stream in which any clear distinction between past and present is lost. Whether or not Sabella is aware of this is of little importance. It is true that individual ages and territories overlap, just as the ancestral idols of Africa and Picasso’s research into the fourth dimension can be seen in the angular features of the Demoiselles d’Avignon. As the title suggests, the Independence series expresses liberation from a previous state of exile. The recovery of this freedom is represented by a large installation consisting of ten photographic projections measuring over two metres tall, suspended in space. A number of grainy, watery images, which can nevertheless be seen to be human figures, float dramatically on these large contemporary canvases in the room. The silhouettes hanging from the ceiling, like acrobats on a trapeze, convey a sense of peace and of harmony reconquered, which – one might add – would be so desirable for all of Palestine, for decades fighting for the same ideal.

Although the cyclical nature of existence does not seem to escape Sabella, the borderline between past and present can be seen in the Till the End (2004) series. Here a group of stones, gathered in Jerusalem and placed in showcases between the entrance corridor and the first room of the Scavi Scaligeri, appear as archaeological findings. Each rock bears an image, a fragment of memory, which spills over from historical reality into hyper-reality, which is the real place of the artist’s research. At this point in the narrative, in Steve Sabella’s epic journey from the Middle East to Europe, it would not be unreasonable to see the theme of uprooting and the converse idea of belonging and integration, which are so much a part of the constant migration towards the Mediterranean shores, intersecting in Italy and Europe. The inevitable abandonment of one’s country and the consequences illustrated by Sabella in his own individual story here, bring out the full metaphorical value of art: managing to bind the artist’s experience to a broader collective exodus, such as the one brought about by the recent Arab Springs and subsequent developments in the provinces of North Africa and the Middle East. The stones are like instant “souvenirs” of those forced to leave their homeland in haste. When they are decorated with shared memories, these simple rocks become precious objects to be preserved.

The series of photographs in the next rooms appear to convey a sense of greater hope about the epochal changes of the new millennium. First there is the In Transition triptych (2010) of unstable photographic frames, followed by six large works entitledMetamorphosis (2012), arranged along the corridor opposite the cellars of the Palazzi Scaligeri. In the latter, the reality of the object is even more symbolic than in the In Exile collages: barbed wire, a symbol of physical coercion, here seems to heal the wounds it causes. Similarly, the wall around the occupied Palestinian territories becomes as permeable as its shimmering reflection in the water. Going beyond the boundaries of the photographic image, both to the ancient art of mosaic and to the new world of multimedia, Sabella thus finds a place of his own in today’s acentric world. The artist writes: «The hard thing was to find a way to allow for a new transformation, while also realising that my DNA will always be the same». It was by examining his condition as an exile, which involved much self-questioning and introspection, that Sabella – as he himself says – was able to delve deeper into the relationship between images and the reality they create. Time collapses, as do places, as we have seen. «Everything is a mental state, the place itself doesn’t exist», says Sabella. Jerusalem, which the artist exile refers to as «the capital of his imagination», is divided not into cubes but into the grids of the four quarters – Muslim, Jewish, Christian, Armenian – just as the wall that divides the occupied territories is a physical geometric line. The wall that attempts to confine the unconfinable remains, becoming unreal and ineffective, just as Bergson’s clock fails to restore the reality of time. Only the imagination has a chance in this undertaking: its creative power can, for example, reunite the stories of Palestinian families with their abandoned homes, where, even though the protagonists are no longer there, the events remain present in the ensuing decades.

The mosaics of shots bring about a dialogue with the rooms of the Roman domus, while in terms of form the 38 Days of Re-Collection cycle, like Till the End before it, recalls artefacts consistent with those of the Scavi Scaligeri archaeological site. In showcases on tall white bases, the artist places fragments of paint removed from the house where he was born and from other neighbouring houses. Sabella has worked on this project for many years, right up to this exhibition in Verona. The artist rented a house occupied by Israelis and remained there for 38 days – hence the title of the series – photographing its domestic interiors exactly as they appeared to him. When he returned to London, he converted the digital colour images into black-and-white photographic negatives, creating gradations of memory. Then the artist applied photographic emulsion to the coloful paint fragments, in effect restoring colours to the original images. Steve’s trip, it could be said, was simply an expedition, with discoveries and restoration, the only difference being that the key value of the objects he found is not the rediscovery of a lost time, but rather the discovery of an original idea that is preserved for the years to come. The way Sabella has brought to light his imagined story of the Eternal City is told in the intense documentary In The Darkroom with Steve Sabella, directed and produced by Nadia Johanne Kabalan, also on view.

The site-specific short-circuiting of space and time ends with Exit, the last series in the show, even though it is dated 2006. The way out quite probably leads towards a new beginning, pointed out by elderly, curved hands that fade one into the other, once again telling of the never-ending march of existence, which corrupts both body and buildings but strengthens human perception. The contorted hands of old people appear as asymmetries on a black background, with no clear ethnic or gender features, and it is hard to pinpoint them in time, other than in a senile fragility that is common to all of us. This fragility is the same that we find in Steve Sabella’s little contemporary “frescoes”, made not with a brush but with a veiling of emulsions. While mental exile gives the illusion of restrictions where there are none – in other words, in post-Wall Berlin – Steve gradually exorcises his own obstacles to freedom. Through his continuous, regimented encroachments, as we have seen, he is an artist who aims for the Universal, well aware that the indeterminateness of the human condition eludes all geometries, including his own. In his works, Sabella thus maintains the ambiguity that makes art necessarily infinite. 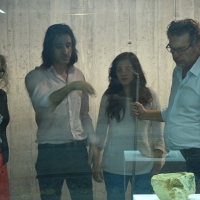 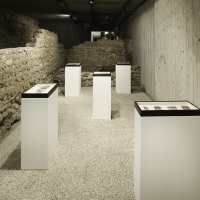 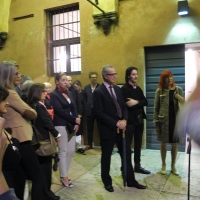 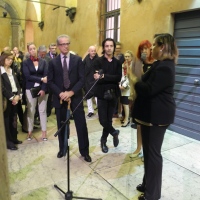 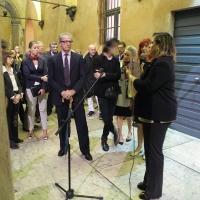 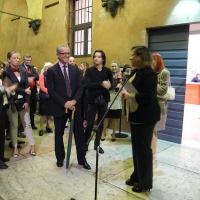 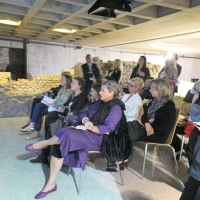 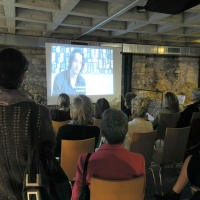 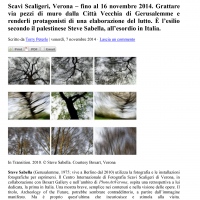 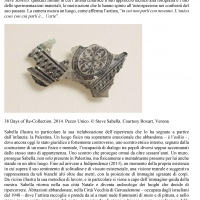 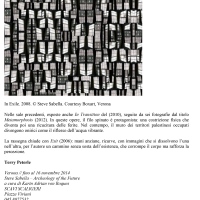 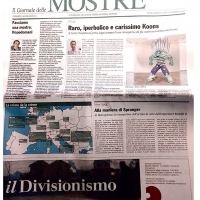 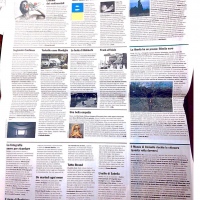 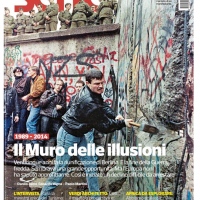 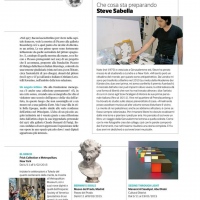