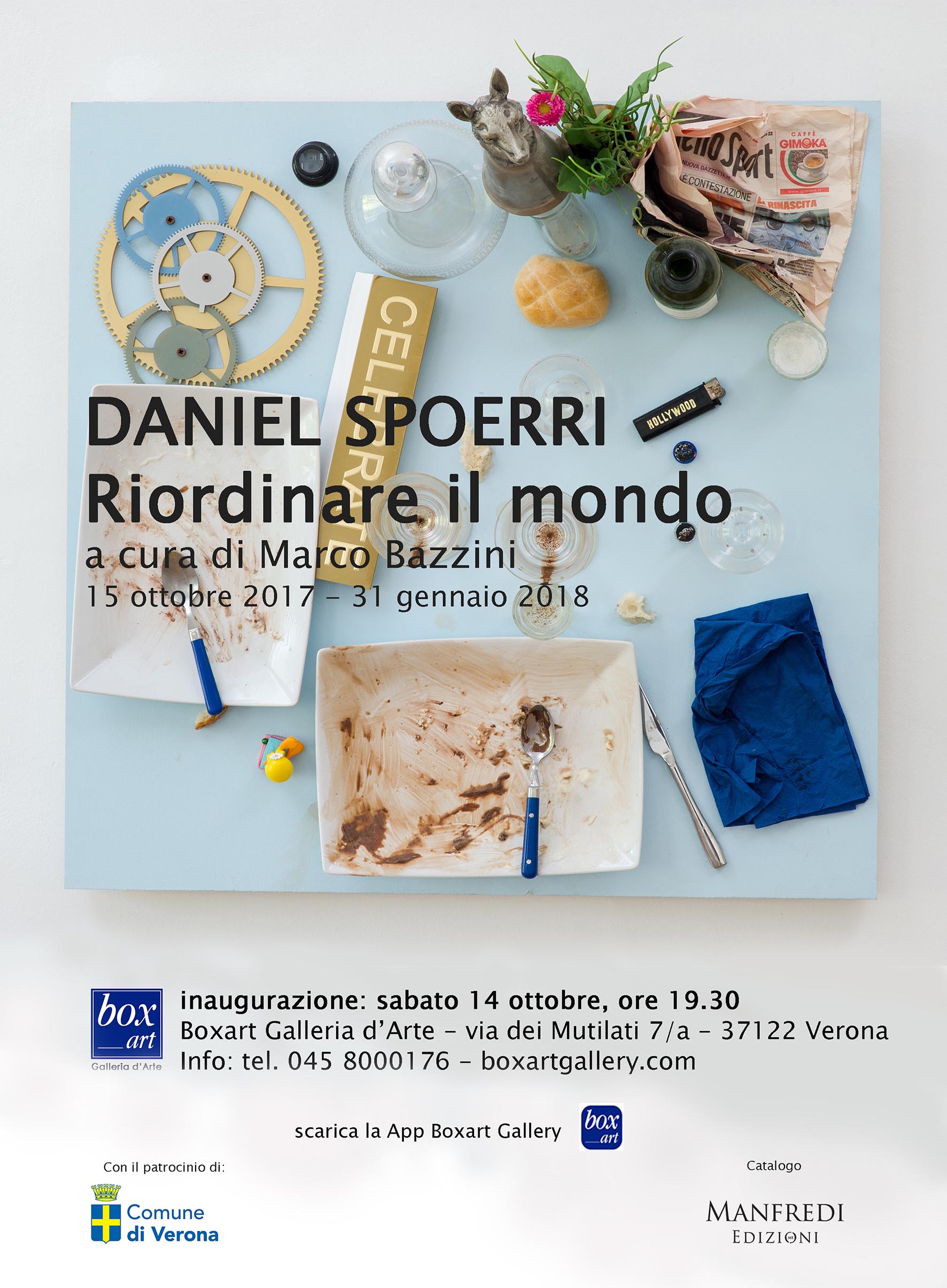 Galleria Boxart is opening a solo exhibition of works by Daniel Spoerri, curated by Marco Bazzini during the 13th edition of ArtVerona.
The evening will be made even more exceptional and exclusive by one of the artist’s celebrated Eat Art banquets: Spoerri will be presenting a palindromic dinner for just 100 people, in the Palazzo dei Mutilati in Verona (in Via dei Mutilati 8, opposite the Gallery). The event has been staged only two other times during his career, and it will follow the exhibition opening, from 9 p.m.

Entitled Rearranging the World, the exhibition will be held at the Gallery in Via dei Mutilati 7/A, Verona, under the aegis of the City of Verona, as well as being included in the events of the 13th Day of Contemporary Art organised by AMACI.

“Art is what makes life more interesting than art”

It could be said that, with his own human adventures and his kaleidoscopic artistic career, Daniel Spoerri has managed to interpret to perfection the words of this motto, which was coined by his great friend Robert Filliou.
Examples of this can be seen in the twenty-five works shown at the Galleria Boxart, which capture the essence of one of the greatest figures in post-war art in Europe, in works dating from 1995 to the present day.

The lion’s share – twelve out of twenty-five works – goes to his famous Snare-Pictures or Tableaux-Pièges, which Spoerri himself referred to, when they were first shown in 1960, as “objects found in chance positions, in order or disorder [that] are fixed as they are. Only the plane is changed: since the result is called a picture, what was horizontal becomes vertical. Example: remains of a meal are fixed to the table at which the meal was consumed and the table hung on the wall.” At the heart of these “anti-gravitational” works, and indeed of much of his artistic production, we find themes linked to food.
Saint Martha’s Bistrot, six Snare Paintings from the series shown in Milan on the occasion of the Expo 2015 (at the Fondazione Mudima), will be shown at Boxart in Verona. The work is dedicated to the patron saint of homemakers, cooks, housecleaners, inn-keepers, hoteliers and restaurateurs.

Another a series of works, also with six panels, is present in the Gallery, capturing a moment of real life frozen by the artist in a different way: his Fake Snare-Pictures (Faux Tableaux-Pièges) do indeed differ from the previous ones because in them Spoerri creates a special situation that evokes those of the everyday world. These works, which were made between 2007 and 2011, are made all the more fascinating by the idea of creating the base out of small 1950s tables with mosaic tops.
Spoerri has very lively and close links with Italy, and this is clear to see in the Boxart exhibition, which also includes the Genetic Chain of the Flea Market, a polyptych of 2000 with its origins in the nomadic nature of his life, which for a time led him to settle in lower Tuscany. He worked on this piece when he had to move the whole “world” of objects, leftovers and rejects in his studio. The exhibition includes some of the panels from the series, which spans 100 metres and which was shown for the first time at the Palazzo delle Stelline in Milan.

The overview of the artist’s works in Verona continues with some works from his erst letzt das erste (last but not least) series, which recalls the sense of estrangement evoked in the famous phrase by Lautréamont: “as beautiful as a chance encounter on an operating table”. The lowest common denominator in Spoerri’s works is the juxtaposition and assembly of discarded materials that gives them their dignity. We see this in the Box of Letters (from the series of the Histoires de Boîtes à Lettres), which consists of a number of boxes of moving-type letters recovered after they were abandoned due to the rise of digital systems.
The exhibition ends with Der Bodybuilder and Schnattergosche, which are sculptural allegories of the masculine and feminine, both from the mid-1990s, while a bronze entitled Quattro su una scala is in the courtyard of the Gallery.

The opening of the exhibition will be followed by a palindrome dinner for just 100 people (info and bookings at www.artverona.it). A palindrome is a sequence of letters that forms a phrase that can be read in both directions. A palindrome banquet is a “theatre of taste”, in which the traditional order of the dishes is reversed, but without changing the tastes. From the beginning, as at the end of every dinner, there will be coffee with the taste of an entrée, through to an entrée which is actually real coffee. The sequence of flavours remains the same, but it is optically reversed.

Since it is so complex to arrange, Spoerri has only put on a banquet like this a couple of other times, most recently in Hamburg in 2005 to celebrate his 75th birthday. He dedicated that event to his artist friend André Tomkins, the famous author of palindromes. 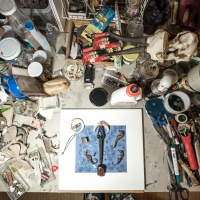 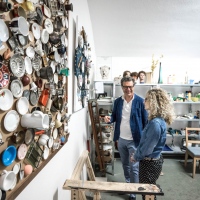 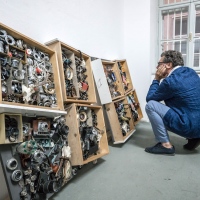 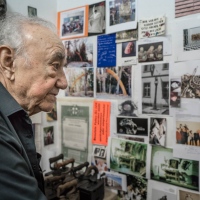 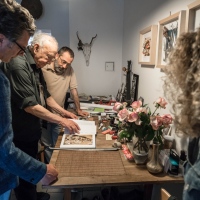